VAVAVOOM CABARET! presents a Las Vegas-esque burlesque which also includes classic and modern forms, as well as aerial and dance performances, live vocals, and a few surprises — such as Jive dance lessons by Natasha (not Fatale, she was a cartoon character), but just as sexy from what I hear. And DJ Noe Correa will spin you right, right ’round baby!

Since the age of 16, tyDi has been spinning all the way from Mooloolaba (oddly the name I have chosen for my future first kin-garoo) on Queensland’s coast of Australia. He’s in his early 30s — yummy and talented and brilliant. Enjoy!

Get ready for the (pitch-Black) dark pop sounds of Andy Black when he brings his tour in support of his new album, The Ghost of Ohio. The Faim and Kulick also perform. And by the way betches, every pair of online tickets comes with a copy of Black’s new album.

Approximately 24-48 hours after purchase, expect an additional email with instructions on how to redeem it. US/Canadian residents only. One CD per pair of online tickets. Not valid for Fan-to-Fan Resale. Blah, blah, blah right?

Community Nursing Services hosts The Art & Soup Celebration, a two-day event that features 50 Utah artists, and over 25 local restaurants providing unlimited scrumptious samplings of soups, breads and delicious desserts. Watch artists create “Quick Draws” — aka Annie Oakley, LOL,— and enter drawings to win a trip to New York, Sonoma, or Cabo. One hundred percent of ticket sales go to the CNS Charitable Care Program, and artists will donate 35-percent of sales to the cause.

Mapplethorpe is a chronicle of the career of gay photographer Robert Mapplethorpe, from his rise to fame in the 1970s to his death in 1989 at the age of 42. The film also stars gay actor John Benjamin Hickey, Tony award-winner for The Normal Heart.

On Pitch Performing Arts presents The Musical Comedy Murders of 1940, where a creative team responsible for a recent Broadway flop (in which three chorus girls were murdered by the mysterious “Stage Door Slasher”) assemble for a backer’s audition of their new show at the Westchester estate of a wealthy “angel.”

The house is replete with sliding panels, secret passageways, and a German maid who is apparently four different people — all of which figure diabolically in the comic mayhem which follows when the infamous “Slasher” makes his reappearance and strikes again and again.

So, don’t make me murder your faces, and go see this witty play by John Bishop.

It’s All About U

Most Likely A Bad Case of Poison Ivy 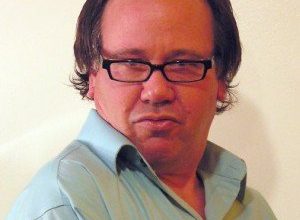