I just finished watching the music video for Taylor Swift’s “You Need To Calm Down.” It’s cute. It’s catchy. And all of Big Gay is in it. That it ends with a call to sign a Change.org petition in favor of the Equality Act is nice, though it would be more useful to direct people how to register to vote because the Equality Act is never going to pass with Republicans in charge.

Swift has received some flack for the video. Apparently, there was a rumor that Swift was going to come out as bi and/or she and Katy Perry were going to make out but that didn’t happen. Swift and Perry do, however, hug while wearing hamburger and fry costumes, which does make them legally married in McDonald Land, presuming that Mayor McCheese issues them a marriage license before the Hamburglar steals it.

And it’s true, LGBTQ lives are inherently political, whether we want them to be or not. So if a pop superstar wants to throw her support behind equality, inclusion and love, I ain’t mad.

Kevin Swanson, a right-wing radio preacher, is SO MAD, though.

“Taylor Swift, most popular female singer in America today, released a song promoting the Leviticus 16 list of abominations, pretty much,” Swanson says on his radio show.

“‘You Need to Calm Down’ is the name of the song, and she’s apparently telling God to calm down about all of his ethical concerns,” Swanson continues. “The video is pushing a petition to support the Equality Act, which is now before the U.S. Senate and it’s intended to persecute Christians who don’t want to celebrate homosexual heathen rites and rituals.”

Seriously, though. The Equality Act supports things like living in a home, having a job, attending school and going to a store. You know, super freaky stuff.

“The message [of Swift’s video] is basically this: we’re beautiful and we’re right and those of you opposed … you’re poor and dumb,” Swanson laments.

Swanson has a word of warning for Swift.

“You can get a little extra cash in your pocket, you can feel like you can get along without God, you can start making your own rules and afford to sin a little more, but that’s just the utmost in foolishness,” Swanson says. “That’s the total lack of the fear of God because the eyes of the Lord are every place beholding the evil and good.”

So if I’m following Swanson right, he’s saying that just because you’re rich doesn’t mean God can’t kill you. So, also, spoiler alert: Taylor Swift is going to die. I know that’s a bummer, but we all are. So maybe don’t devote your life to hating people? That’s the message of “You Need to Calm Down”, actually. Swift is saying love yourself, love others, eat some cake, and also throw some cake on the ground for some reason.

But that’s not the conclusion Swanson comes to, apparently.

“In the words of Johnny Cash, ‘You can run on a long time, but one of these days God will cut you down,’” Swanson says. “So what do we say to Taylor Swift and her new concoction ‘You Need to Calm Down’? I think we just tell Taylor Swift she’s a fool. That she doesn’t fear God, and sooner or later, God will cut her down.”

Uh, sure. But at this very moment children who’ve been kidnapped by our government are sitting in their own filth in concentration camps while the Trump Administration argues before a court that there is no obligation to provide these kids with soap, or toothbrushes, or beds. And the Republican response to outrage over these atrocities is, “You need to calm down.” 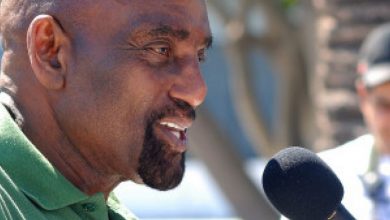 Creep of the Week: Steve King