The road to the shower in Chateau Pap Smear is fraught with danger and excitement.

Last month, I related the experience of searching for, and then, purchasing Chateau Pap Smear. Now is, as the late Paul Harvey would say, “the rest of the story.”

Chateau Pap Smear is 97 years old. Consequently, out of caution, I decided I should have it inspected by a professional to see just what kind of 97-year-old problems I might be inheriting. I searched online for house inspectors. My criteria for choosing one was, of course, whomever had the best-looking photo in their advertisement. I chose a porno-magazine-worthy specimen of the male form. For the purposes of this column, I shall call him Chief Pipe Inspector Peter, or Peter Piper for short.

I anxiously awaited the day of the scheduled appointment. I painstakingly made sure that all was in readiness. The house was clean and orderly. My breasticles matched my hair, and I attached a wrench and a screwdriver as my interchangeable nipples of the day, just in case he wanted to play a rousing game of “plumber’s helper” (just like in all those movies) while inspecting my pipes.

The doorbell rang, which I thought was a good omen, being that after 97 years it’s a miracle the bell still worked. I went to the door and momentarily got a severe case of the vapors as I beheld the masculine beauty of Chief Inspector Peter Piper. He wore a most snugly fitting t-shirt and the tightest most well-packed pair of jeans I had beheld in a very long time. I led him into my lair, I mean to the basement furnace room. He slowly removed from his tool belt a very long and slender shaft. My heart quickened. Whatever was he going to do to me? My hopes came crashing back to reality when I saw that it was only his flashlight, and he began poking around the water heater. My eyes were glued to his gluteus magnificus.

After a few minutes and several “plumber’s helper” fantasies, I became aware that he was speaking to me, saying that the water heater was tremendously old, on its last legs and would need to be replaced very soon, and the water pressure was extremely weak. Then suddenly before I realized what was happening and I could trap him with my feminine wiles or lasso him with a feather boa, like a fart in the wind, he was gone. I was left alone and dejected, a sad, lonely old queen, in her basement with an old water heater and an unused screwdriver.

Armed with Peter Piper’s ominous information of imminent plumbing failure, I began living in the house. One of the selling features of the place was that the master bathroom had a jetted garden tub, along with a shower. I had visions of a nearly naked Peter Piper feeding me grapes as I luxuriated in a swirling steaming bubble bath. I was ever so excited to give them a try. So, I jumped into the shower and turned on the hot water. A mere dribble of icy cold water came trickling out of the shower head.  I swear it took a full five minutes for the water to get warm. I kept waiting for it to get hot enough that I would need to turn on some cold water to balance it. That moment never came. It was lukewarm at best. Taking a shower in it could best be described as a tepid, unenthusiastic sponge bath.

I decided to try the jetted tub. With the dribble of water, it took 45 minutes to fill the tub just halfway, enough to reach the water jets. But the warm water gave out after 30 minutes, so I had to fill pots and pans with cold water and heat them on the stove to supplement the feeble water heater.

This is how life in Chateau Pap Smear began. Every day, a lukewarm sponge bath. OH, MY, GAWD! I’m in plumbing HELL and I don’t have enough money to fix it. The best result that could be achieved in the shower was a MOIST Pap Smear.  Eeewww!

After a whole year of suffering and complaining to anyone who would listen, one day I was at Club Try-Angles relating my woes to Gene Geiber, and he asked me if the thermostat was turned up on the water heater. I exclaimed Chief Inspector Peter Piper examined it, of course it was. It was two months later when I was down in the furnace room and suddenly thought, perhaps I should actually look at the thermostat. Wouldn’t you know, it was turned all the way down to the lowest setting. WELL, SHIT! I turned it up to high.

The next morning, I turned the shower on full hot as usual. After waiting the requisite five minutes, I jumped into the shower as usual and shrieked with pain as boiling hot water scalded and peeled my naughty bits. A breasticle nearly poked my eye out as I was slipping and sliding, violently trying to escape from the boiling aquatic nightmare.

Needless to say, the family jewels were carried in a scarlet red “purse” and I was forced to walk very bow-legged for the next few days. 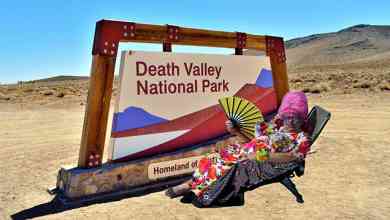 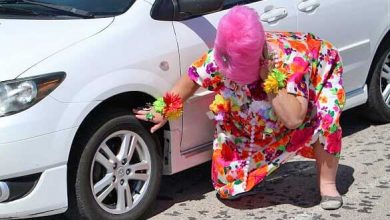 A tale of studs