Opening Sept. 6, An Other Theater Company presents Jen Silverman’s The Moors, razor sharp dark comedy about a pair of spinster-adjacent sisters living out their lonely lives in probably the 1800s on the moors of… let’s say England. Things change when a governess arrives under mysterious circumstances, and their dog, a mastiff, befriends a moorhen who he confuses for God.

“I love its absurdity. I love its darkness. I love that it both explores and defies conventions. It’s this gothic Victorian piece with talking animals and a rock ballad. What more could you want?” says Liz Whittaker, the assistant director and sound designer for the project. “I hope [the audience is] delighted by it, and I hope they examine their own relationships. Are there times when their relationships are possessive or cold or desperate? How can we make our relationships healthier? An Other Theater Company is so good at creating artistic, powerful, and moving works in a tiny space with a limited budget. The script is brilliant, and I think we’ve brought it to life in thrilling ways.”

Beyond its social examination, the play provides laughs in droves. “Even knowing the script and what to expect going in, I was surprised by just how much and how hard I was laughing. The cast is so impeccable that there were moments I felt disruptive because a joke made me chuckle far longer than felt appropriate. I had to cover my mouth just so the play could keep going,” said co-artistic director Kacey Spadafora. “The script has a lot to say, says it powerfully and elegantly, and lets the audience enjoy themselves the entire time.”

The play marks the first production in the company’s third season which, along the lines of the theater’s mission statement, focuses heavily on stories led by women and the LGBT community. Some other shows in the season include Doubt by John Patrick Shanley, Safe by Chelsea Hickman, and The Normal Heart by Larry Kramer.

The Moors runs Fridays and Saturdays Sept. 6-28, at 7:30 p.m., in AOTC’s blackbox theater in the Provo Towne Centre. There will also be one Sunday performance on Sept. 22 at 5 p.m.

Tickets are $12-$14 online and $15-$17 at the door. Opening night tickets are pick-your-price, and free tickets are available throughout the run for those who cannot afford them through AOTC’s Play-It-Forward program. For more details on this program, or to buy tickets, visit anothertheater.org. 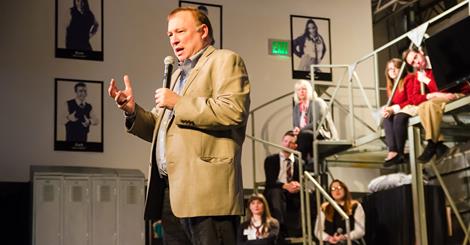