KRCL had been on for little more than six years when sitting alone at my work cubicle, I first heard a woman’s deep, throaty melodious voice say, “If you are, or know or love someone gay or lesbian, the next half hour will be informative as well as entertaining.” I nearly peed my pants. I had just discovered this funky station calling itself “Radio Free Utah” a few days before. It touted itself as being the voice behind the Zion Curtain but I was mostly intrigued by its mix of eclectic music and liberal news programming which I discovered while channel surfing.

On that day as I was listening, unsuspecting that my world was soon to be turned upside down, this program came on calling itself “Concerning Gays and Lesbians.” I jumped out of my swivel chair and quickly turned the volume way down low, only audible enough for me to hear the salacious and audacious program. By the end of the program, I was a changed man. I realized for the first time that there were gays, other than me, in the city; enough to warrant a local program.

The woman calling herself Mickey read a series of phone numbers and I quickly scrawled out the numbers and tucked them into my pants pocket. Miraculously this little half-hour program gave me the courage, the resolve and the hope to live a more authentic life.

How in the world did a weekly program dedicated to local gay and lesbian events happen in Salt Lake City of all places! It began with a vision by a gay social activist named Stephen Holbrook.

Holbrook started out as your typical Bountiful young Mormon Republican; however, he came from an old, well-connected Mormon family. As expected, he served an LDS mission and was sent to Hong Kong and Chinatown in San Francisco. There, stark poverty among the Chinese profoundly affected him. It became the foundation for his belief that “Democracy cannot function if some groups have far more and other groups have far less.” Holbrook left his mission and quit the LDS Church.

At home in Utah, Holbrook’s sense of social justice made him astutely aware of the racial discrimination that existed as mixed-race marriages were illegal and African Americans were not allowed to purchase certain real estate properties. However, still as a Republican, the 21-year-old went to work for Utah’s Congressman Sherman Lloyd in Washington. While there Holbrook was given permission by the congressman to attend the March on Washington for Jobs and Freedom in 1963. He heard Martin Luther King famously state that he had a dream. And now so did Holbrook.

However, an aide to Lloyd said that Holbrook could either work for the congressman or for civil rights but he couldn’t do both. For Holbrook, it was an easy decision. He chose to join the Salt Lake branch of the National Association for the Advancement of Colored People and soon found himself within the year registering blacks to vote in the deep South.

During the summers of 1964 and 1965, Holbrook campaigned for voter registration in the South along with other Freedom Riders, helped by his friend and progressive, Robert Freed, then owner of Lagoon amusement park. Freed actually paid Holbrook expenses to Mississippi and also was responsible for the desegregation of Lagoon. Freed abolished its former policy of prohibiting blacks to swim or dance at the park.

While in Mississippi, Holbrook worked in the office of Charles Evers, the brother of the murdered civil rights leader Medgar Evers. It was an intense time, where thousands were arrested and over 50 black churches were bombed or burned to the ground. In 1964 at the age of 23, while helping two black women register to vote, Holbrook, himself was arrested. His crime; taking a picture of a water fountain with a sign stating “Whites Only.”

Thrown into a cell called a “hot box”, Holbrook spent time there sweltering in the summer heat and humidity. The jailers also turned on the actual cell heater to increase his misery. Eventually, Holbrook was freed after a group of Jewish people from New York and officials from Utah raised the money for bail. Back in Utah, the headlines read “Utah Junior Arrested in Mississippi.”

Upon his return to Utah, Holbrook continued to work for civil rights, including campaigning to persuade the LDS church to support civil rights as a moral issue even though the church prohibited African Americans from holding the priesthood.

During the course of its existence, over 5,000 people participated in the moratoriums and other major events sponsored by the United Front, thanks to his efforts. One of these events was organizing Utah’s first Earth Day in 1970 at Sugar House Park.

At the age of 29, Holbrook began to work within the system and he ran for the office of Salt Lake City Commissioner to represent students and the impoverished of the city. While he lost, from 1971 to 1973 he was the chairman to the Advisory Committee on Housing and lobbied the Utah State Legislature for Utah’s first for low-income housing.

In 1972, Holbrook was a delegate to the Democratic National Convention and then he ran and won a seat in Utah’s House of Representatives as a Democrat. As a left-leaning elected legislator, newspaper reporters loved to comment on the length of Holbrook’s hair and how Holbrook was the first man to have a beard in Utah’s legislature since 1896. Despite his appearance or because of it, he was elected to the legislature for three terms, during which Holbrook successfully helped raise money for Utah’s first homeless shelter and was the primary mover of reform of the juvenile justice system.

Because much of Holbrook’s social-justice activism involved interacting with the news media, he found that much of Utah’s media outlets were unwilling to cover local dissenting opinions and anti-establishment news.

In 1974, he then began a five-year effort to open a nonprofit community radio station which culminated with KRCL 91 FM airing in 1979. Among Holbrook’s vision for the new station was always to include local programming for minorities, including gays and lesbians. Holbrook chose not to seek re-election for a fourth term in 1980 because he was working as the station’s first general manager.

In 1979, KRCL’s first GLBT program was an hour-long show called “Gayjavu.” The program evolved over the next few years into “Concerning Gays and Lesbians” which was one of the nation’s longest, (if indeed not the longest) continuous local gay and lesbian radio program in the nation.

Becky Moss, first using the alias of “Mickey Moss”, was the producer of the show from 1982 to 2003. During the course of “Concerning Gays and Lesbians,” Moss had had many co-hosts; among them, Mel Baker, Erik Meyers, Beauchaine, Dan Fahndrich, Jeff Freedman, Jim Rieger, Debbie Rosenberg, and Ben Williams.

Disappointingly, as of now, KRCL has not kept its commitment to have local GLBT programming. With the end of Troy Williams’ RadioActive segment, the vision of Stephen Holbrook is now left unrealized. 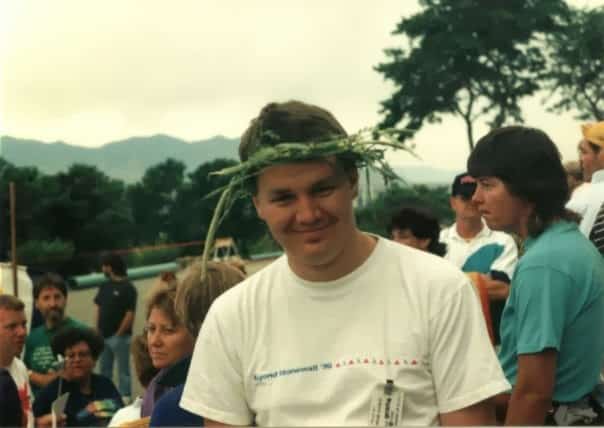 The birth of Mormon homophobia