49ers coach Katie Sowers made history at the Super Bowl in February. She was the first woman and the first LGBTQ person to take a sideline coaching job at the big game. She played in the Women’s Football Alliance for the West Michigan Mayhem and the Kansas City Titans. In 2016 she got an internship with the Atlanta Falcons before moving to the 49ers in 2017 as a paid coach. She tried to coach at her alma mater and was refused because she was a lesbian. Yes, it was small, private, Christian-oriented Goshen College (as in “Land of …”) in Indiana.

Private sector donors to Florida’s school voucher system are pulling their support because the state allows schools to discriminate against LGBT students. Most recently Wells Fargo and Fifth Third Banks will cease donating to the fund, joining other businesses. Fifth Third Bank has contributed $5.4 million to the fund and is seeking a “more inclusive regulation ending discrimination ranging from self-expression, GLSEN organizations, misgendering, athletic participation and locker room/both room facilities.”

If you blinked you missed it, but the eagle eyes at the so-called One Million Moms spied the gay agenda in its full glory in a hummus ad during the Super Bowl. The ad for Sabra hummus stars RuPaul’s Drag Race alums Miz Cracker and Kim Chi, who flashed on-screen for about three seconds. One Million Moms, part of the American Family Association, wrote, “Sabra Dipping Company is choosing to push an agenda of sexual confusion instead of promoting its actual product.” They called for people to boycott the 2020 Super Bowl broadcast. 102 million U.S. viewers did not participate in the boycott, though maybe one did.

The Stonewall Inn Riots were 50 years ago, so maybe it’s time for another lesson of “Don’t mess with drag queens. A Missouri legislator is sponsoring a bill that could imprison librarians who host a drag queen story hour or allow youth to check out books on LGBTQ topics. So, drag queens in Missouri and surrounding areas are organizing a protest at the state capitol on March 7 with a Facebook event under the name “Queens, Kings & everything in between!”  The group organizer writes, “You’re talking about people in big, poofy dresses telling stories in funny voices and trying to get kids interested in reading, which I think we should all want.”

Hard to believe, but a current survey reports 25 percent of HIV-negative millennials ages 23 to 36 report that they avoid hugging, talking, or being friends with someone who is HIV-positive. The study shows widespread ignorance exhibited by both HIV-negative millennials and Gen Xers (18- to 22-year-olds): 30 percent said they prefer not to interact socially with someone with HIV. One in three surveyed Black and Latinx people reported avoiding even shaking hands or sharing drinks or utensils. The survey from Merck and the Prevention Access Campaign also found that a majority of HIV-negative Generation Z and millennial individuals are unfamiliar with the term “undetectable” and the phrases “undetectable equals un-transmittable” and “U=U.”

Civil activist and organizer of Martin Luther King’s 1963 March on Washington, Bayard Rustin, has been posthumously pardoned by California’s governor for a conviction under outdated laws punishing homosexual activity. Rustin was arrested in 1953 for having sex with two men in a car in Pasadena. He served 50 days in the L.A. county jail. This was enough for MLK’s lieutenants to keep him from being on the dais at the March 10 years later. Rustin was instrumental in organizing many other protests and demonstrations. The banishment was triggered when U.S. Sen. Strom Thurmond of South Carolina read Rustin’s arrest file into the Congressional Record.

No Block on Blockers

In the face of opposition from medical professionals, therapists, and parents, legislation aimed at forbidding South Dakota physicians from providing puberty blockers and gender confirmation surgery to children failed in committee. The bill aimed at preventing hormone and chemical therapy or surgery to be provided to minors under the age of 17. The bill’s sponsor said the issue will not be addressed again in this session. However, the same type of legislation was just offered in Ohio. Why, Oh Why, Oh Why, Ohio

How does President Pete sound?

What started as a long shot a year ago now doesn’t seem so farfetched. South Bend Mayor Pete Buttigieg has finished in the top two spots in the first two contests for the Democratic Party presidential nomination. In the Electoral College-like scoring system in Iowa, it seems he placed, barely, second in popular votes and first in the delegate count. In New Hampshire, he was again barely second to Bernie. Next states are Nevada and South Carolina where “Mayor Pete” faces a stiff test with a large African-American voter base, who heretofore have supported former V.P. Joe Biden.

In 2017, California signaled its virtue by banning state employees from traveling to states with discriminatory policies against LGBTQ. It began during the pile-on involving North Carolina passing a “bathroom bill” (later modified) which resulted in the NBA pulling an All-Stars Game and California Tech Companies pausing plans to build facilities in the state. California added 11 other states, including Texas, which just filed a lawsuit against California over its ban. Texas claims California’s action amounts to “economic sanctions” against Texas and interferes with interstate commerce. The Calif. AG says that “bans on official travel will continue against states as long as they have laws on the books that discriminate on the basis of sexual orientation, gender identity, or gender expression.”

President in mainstream. He’d vote for a gay person

On Geraldo Rivera’s oddly named podcast “Roadkill With Geraldo”, the Current president suggested that he would vote for a gay person for president. He said, “There would certainly be a group” of voters who probably wouldn’t vote for a gay candidate based on sexuality. You and I would not be in that group,”  he told the broadcaster. Rivera replied, “We would not.” A recent Gallup Poll found that 76 percent of American voters would vote for a gay or lesbian candidate, up from 74% in 2015.

Britain Plans to Ban Incitement of Hatred Against Gays 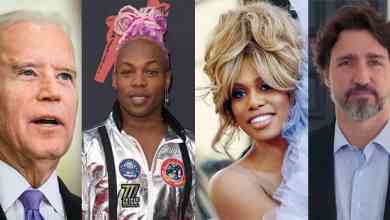