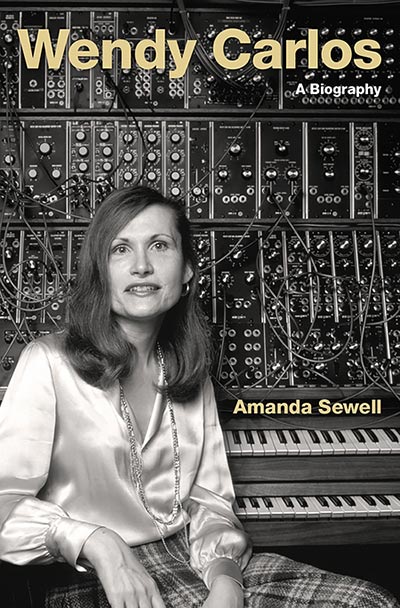 It ain’t none of your beeswax.

None of your business, so just keep your nose out of things. You’re on a need-to-know basis, and you don’t need to know. It’s being taken care of, never you mind, it isn’t your concern. In Wendy Carlos: A Biography by Amanda Sewell, some things just aren’t discussed.

No one who knew Wendy Carlos as a child should’ve been surprised that she became the musician she did: Carlos’ mother’s family loved to sing and dance, and Carlos’ parents wanted to make sure she continued the tradition. They gave her piano lessons but they couldn’t afford a piano, so Carlos’ father drew piano keys on a piece of paper so she could practice.

Though she was “assigned the male sex at birth,” Carlos knew early in her life that she was a girl, and was baffled that others couldn’t see that. It grew to greatly affect her: somewhat of a prodigy in music and early computing, Carlos won awards and accolades for her studies but her gender identity left her feeling awkward and alone, Sewell says. This was a time when transgender people were largely held up as “freaks.”

So Carlos kept her gender identity private, only revealing her truth to one friend with similar passions for music experimentation. Enjoying a spirited mutual challenge, she and Rachel Elkind played with new sounds until the day Elkind became intrigued by Carlos’ rendition of a Bach composition reproduced with a Moog synthesizer. As it happened, Carlos needed money to continue her work and with Elkind’s help, that composition became an entire album they called Switched-On Bach.

It did the trick: Carlos indeed made money from the million-selling album. But it also made her famous, which led to requests for interviews and intrusions about her gender identity, a subject that she felt unnecessarily superseded her musical career.

And that was something she absolutely did not want.

Over the past 40 years, Wendy Carlos has denied most requests to be interviewed, including an offer extended by author Amanda Sewell for this book. No problem; Sewell used an abundance of other sources to craft this biography, indicating that Carlos’ refusals were likely due to her ire at reporters who’ve continued to focus on her gender, rather than on her work. The irony is that a good portion of “Wendy Carlos: A Biography” deals with Carlos’ gender identity and her transitioning.

And yet, how could it not? Sewell shows how Carlos’ giftedness and her pioneering use of then-new technology changed music, as a whole; in a way, her respectful reporting on Carlos’ transition, relative to 1960s social perceptions and LGBT history, both occurring at roughly the same time, also shows another aspect to Carlos’ personality and her dogged reach for what was then rather new. Still, one can sympathize with Carlos’ wishes, which makes reading Wendy Carlos: A Biography feel sometimes voyeuristic. Introducing new fans to her wax is important, but check it out: does the rest of the story need to be waxed?

BookwormSez: ‘Inside an Honor Killing’

BookwormSez: ‘Would You Rather? A Memoir of Growing Up and Coming Out’

BookwormSez: ‘Hiding Out: A Memoir of Drugs, Deception, and Double Lives’