The road to the Grand Canyon is fraught with danger and excitement.

In August, after the smoldering and steaming mass of metal that was my beloved Queertanic VI blew its head gasket, I quickly searched for, and purchased a suitable, if not newer and better, replacement. Queertanic VII is my first car in 35 years that is less than 10 years old. So, what does a queen do when she has a new ride? Why take it on a road trip of course.

So, I loaded many boxes and bags of snacks into the about-to-be-christened Queertanic. I put on my most comfortable caftan, opera-length driving gloves, and my most heavy hair sprayed beehive wig (to withstand wind damage, of course) and hit the road. Grand Canyon, here I come! When I was about 15 miles down the road happily singing along to ABBA, I suddenly realized that Mr. Pap Smear was not in the car. Apparently, in all the excitement and confusion of loading the car, I had left him standing in the driveway, so I had to turn around to fetch him.

Halfway through Millard County, my tummy began to rumble, more than the many snacks I took with me. I began “Man’s Search for Happiness”, or in other words, the hunt for a Chuck-A-Rama to keep my breasticles from deflating. I always believed that Chuck-A-Rama had locations everywhere in Utah. Well, I was extremely sad to discover that, in the era of Covid in rural Utah, a buffet of any kind was out of the question and a drive-thru was the only option. Of course, I would have preferred to refill my breasticles at a fine dining establishment such as Golden Corral, but in this instance, I settled for a dozen Big Macs and fries. Donald Trump, eat your heart out!

When we reached Page, Arizona, we stopped to watch the sunset at Dead Horse Point State Park. At the entry booth and we were cheerfully greeted by a very handsome park ranger wearing an extremely fetching and form-fitting uniform, snugly stretched over some obvious bulging biceps. Be still my fluttering heart. He informed us that the viewpoint was a simple hike on an easy-going smooth trail, and could cover it in less than 10 minutes. OK!

We parked, I pulled out my rolling walker and set out along the path. Of course, some curves hid the true extent of the trail. As we rounded the first bend, the real extent of the footpath became apparent. My God, it was half a mile long descending a hill. I lamented, what goes down must eventually come back up! Shit! This might kill me. Thank god, I at least wore sensible shoes. Luckily, since I had the walker, I was able to stop and rest every hundred yards or so.

We reached the viewpoint of the sunset. The scene was indeed spectacular! About 100 people were milling about, posing for photos and gawking at the canyon. Just after sunset, I thought we should start the long-ass trek back to the car. As I struggled up the incline, of course, other people passed me as if I was standing still.

For inspiration to continue the arduous climb, I gazed upon the strong, muscular thighs of a handsome hiker wearing some fairly short-shorts ahead of me. It was difficult to conceal my drool. By the time we neared the parking lot, it was completely dark, and we were reduced to using my breasticles to light the pathway.

That short 20-minute hike actually took us an hour and a half. I clearly understood why this place is named after a dead horse. Ever-so-excited to check into the hotel and relax my aching bones in the pool, I was devastated to learn that due to Covid concerns, the pool was closed. Damn!

The next day, we drove to the Grand Canyon. We bought tickets to have an air tour of the canyon in a small 8-seat single-engine plane. Now I have a fear of heights, as well as vertigo, so I’m a little bit dizzy just standing on solid ground at the best of times. Consequently, I approached this excursion with much trepidation.

The extremely elderly pilot (not a confidence builder) quickly noted where the barf bags were, and we took off. The scenery was indeed beyond magnificent, but the plane ride was as turbulent as riding Space Mountain at Disneyland. I struggled, fearing that my breakfast might make an encore appearance. OH! MY! GAWD! After one huge bump, I envisioned a nightmarish scenario where the plane was about to crash, and they threw me from the plane to lighten the load.

When we touched down, I tried to kiss the earth, but my breasticles prevented my lips from touching the ground.

A “Fluffy” Tale of Global Warming 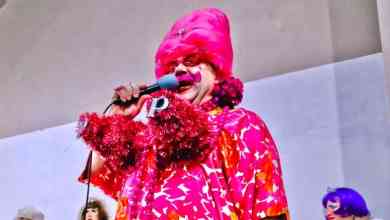 The tale of raccoon love