The road to excellent potato chips is fraught with danger and excitement.

Here I sit, all alone in Chateaux Pap Smear, trying to be Covid-safe. It seems like I’ve been here for years. I should be using all this time to accomplish the many tasks needed around the house, such as rewiring a few of my breasticles, backcombing a dozen beehive wigs, and adding maternity panels to all my caftans to accommodate the results of my quarantine-queen potato chip snacking.

But alas, the inexorable lure of Netflix has drawn me into its web. After 11 months of delving into the video library, I’m pretty sure that when you look past my mascara and glitter, my eyes are now rectangular from staring at the screen.

In fact, I’ve just finished watching Downton Abbey and The Crown for the third time. Moreover, I’ve been watching so much British TV that I’ve started to speak with a British accent. I feel if I invite Lizzy Windsor to high tea and she would feel right at home.

Besides 120 acres of obligatory Idaho potatoes we tended to, we also raised five thousand sheep. Now, most of you might see idyllic images of charming innocent lambs, frolicking, and grazing in a scenic pasture. But nothing could be further from reality.

In reality, sheep are nasty, stinky, stupid creatures that I’m sure God sent to earth to torture me. They are indeed so foul-smelling that even on the hottest of days when the school bus would come within one mile, everyone would close their windows, despite the heat, and wait until they were at least another mile past our farm to open the window again, lest they puke due to the stench.

It was my job to feed the sheep. Now, in The Bible, Jesus said “Feed my sheep.” I’m sure he meant that as a faith-promoting instruction, but sheep shit! A lot! All over the place! And several inches deep! Sadly, forced to wear unattractive hip-waders instead of stylish heels, I decorated them with glitter and Elmer’s glue.

Sheep shit stinks. The stench clings to your clothing and hair. Just walking within 20 yards of the corral necessitated a bath. Sheep shit is green, and it stains.

Walking among the creatures was problematic, and I tried to breathe through my mouth. It, however, was a foolhardy plan because sheep shit is slippery. Sheep shit spatters and sprays. When the critters would inevitably try to run away from you, their hooves would spin out on the slimy sheep shit, thus flipping large globules of fresh and juicy sheep shit into my open mouth and eyes.

Thus, I come to the aforementioned super-spreader event.

During the wintertime, one of my chores was to use a front-end loading tractor to scrape tons of the offensive sheep shit, load it into a manure spreader, take it into the fields, spread it around — to grow better potatoes, of course.

Who knew the secret to great potato chips is a generous spreading of sheep shit?

Naturally, in the act of spreading the sheep shit in the fields, numerous chunks of it flew high in the air. In the cold weather, clouds of odiferous steam rose from the spreader creating a virtual cloud of gut-wrenching noxious fog.

On several occasions when I was forced to drive the spreader downwind, the noxious cloud would envelop me, and not even the lights on my breasticles could penetrate the hazardous haze, leaving me blinded. Also, I’d struggled to breathe and remain conscious.

There is not enough cologne in the world to counteract that sheep shit stench. Some of the choicest gooey globs of sheep shit would rain down upon my pretty beehive wig in a veritable meteor shower.

One time, an exceptionally large clod of sheep shit hit me at just the right angle and knocked my favorite pink beehive wig clean off my head. The beloved hairpiece hit the ground and was promptly run over by the tractor before I could hit the brakes. My eyes filled with tears — perhaps from my crushed emotions or the poisonous fumes of the cloud, I couldn’t tell.

I slowly climbed off the tractor and cautiously looked for my “precious.” I saw a faint glint of pink and reached to retrieve it. What I recovered was an unrecognizable flattened mass of gooey mud and sheep shit. The best hairdresser in the world couldn’t have salvaged it. I was forced to bury it in an unmarked grave at the end of the field.

The Tale of the Flaming Queen 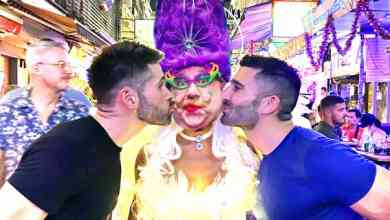 The tale of death-defying Bingo