The 45-day session of the 2021 Utah State Legislature concluded and, in short, bills most affecting Utah’s LGBTQ community were either shelved or not heard in committee.

Two major bills that affected the community were aimed at transgender youth. One bill that dealt with forbidding Utah doctors from treating those under 18 years of age with hormonal or surgical therapies was passed through a House committee but was sent back to the Rules Committee — a move most often used to shelve a bill for the rest of the session.

A second bill titled “Preserving Sports for Female Students” passed out of a House committee on an 8–6 vote and passed the full House on a 50–23. Senate committee members, however, did not vote on the bill, effectively killing it.

Both bills are expected to be reworked and brought to a later session. National ultra-conservative and religious groups spearheaded both.

House Bill 92 was sponsored by financial advisor Rep. Rex Shipp, R-Cedar City, in the House, and CPA Sen. Curt Bramble in the Senate. Bramble has long been a “traditional marriage” supporter and is considered one of the Hill’s most conservative legislators.

The bill had a long list of medical definitions and added several procedures to the “unprofessional conduct” statute, including “unnecessary puberty inhibitions” or “sex characteristic-altering procedure” for those under 18 years old.

Exceptions to the restrictions would be surgeries or procedures performed of sexually ambiguous or with certain chromosomal variations.

In the House Health and Human Services Committee hearing on Feb. 19, chair Merrill Nelson said that the committee members received many letters and other correspondence related to the bill.

“We have a lot of interest in this bill,” Nelson said as he brought it before the committee. “We have received many emails from both sides of the issue over the past several weeks. Let me just say that we read the emails and take the matter very seriously, gather facts, and render an informed, unbiased judgment.”

“This is about protecting children,” bill sponsor Schipp said as he introduced three “experts” to speak in it.

Quentin Van Meter, an Atlanta-based doctor and president of a conservative pediatric group, has previously called hormone treatments “medical experimentation based on wishful social theory” and was discredited as an expert by a Texas judge who said he didn’t offer a “fact-driven” opinion on puberty-blocking drugs.

Miriam Grossman is a doctor who often tweets negative statements about transgender therapies, calling it “insanity” in a “world that caters to adult confusion and selfishness, and children are sacrificed.”

And lastly, Brigham Young University professor Shirley Cox testified that transgender children are going through a phase and that she has studied many patients who are “very unhappy with sex-change operations and chemical arrangements.”

Public testimony was limited to 60 seconds per person, and many in Utah’s LGBTQ community spoke.

After the testimony, Rep. Robert Spendlove, R-Salt Lake, said he had concerns about the “process problems of the bill” and moved to return the bill to the House Rules Committee. The motion passed 10–3.

Sponsored by law firm business manager Rep. Kera Birkeland, R-Morgan, in the House and Bramble again in the Senate, House Bill 302 made it much further in the session but also ended up being sent back to committee by the Utah Senate.

Birkeland introduced the bill couching her arguments for the bill as a fight for the underdog — girls in sports — saying that the history of females participating in sports is a short one that is on the brink of being lost to transgender females.

“Females will be left as spectators in their own sports,” she warned.

Birkeland even said that it isn’t fair that girls must compete against transgender girls while experiencing menstrual cramps.

She brought a female Utah track athlete who said it was “awkward” to compete against a transgender girl.

The committee voted to pass the bill to the House floor 8–6 with one abstention.

In the House, the bill was passed 50–23 and was sent to the Senate.

After the House vote, Utah Gov. Spencer Cox, in an emotional press conference, said that the bill was among the most difficult the legislature would consider and said that the process it came to the floor was not the “Utah way” of bringing all sides to the issue.

“It is a threat to women’s sports,” Cox said. “But also, and this is where we need to be very, very careful. If you have not spent time with transgender youth, then I would encourage you to pause on this issue. We have so many people who are in a very, very difficult spot right now.”

“We’ve gotten really good at the LGBQ side of things, but we are struggling on the T side of things,” he said. “I’m meeting with the sponsor to find if there is a Utah way to solve this issue.”

“We have now had several meetings with Rep. Birkeland. I do not see her as an enemy, nor even as a member of an opposing team. She is a fierce champion for girls’ sports,” EU executive director Troy Williams said in a statement. “I hope that we will always match her passion as we advocate for LGBTQ kids. My hope is that we can work with Rep. Birkeland in the future to ensure fairness for all of Utah’s incredible student-athletes.”

The bill was brought before the Utah Senate Health and Human Services Committee and received much testimony on both sides, including Salt Lake City Mayor Erin Mendenhall, who said. “the idea that exclusionary legislation like this, which targets a single perceived advantage, will level the playing field for girls statewide is misguided. Transgender youth in my city and statewide daily struggle with depression and self-harm and thought and plans of suicide… it’s because too many in our soiety have made life excruciating for them.”

After the testimony, Sen. David Buxton, R-Davis and Weber Counties, moved to move on to the next agenda item as a parliamentary procedure to bypass voting on the bill, effectively killing it. After some confusion, as the bill was the last on the agenda, Sen. Jani Iwamoto, D-Salt Lake City, moved to adjourn. The motion passed and the bill was shelved for the session.

A few other bills were also on QSaltLake’s radar, including HB93, sponsored by Rep. Brian King, D-Salt Lake. The bill expanded youth suicide prevention programs to elementary and secondary schools, where previously it only addressed high schools. The bill passed both the Senate and the House with large bipartisan support and now site on Gov. Spencer Cox’s desk.

HB 204, sponsored by Rep. Robert Spendlove, R-Sandy and Draper, that would exempt feminine hygiene products from being taxed, did not even get a committee hearing.

“You have so many allies. There were so many people lobbying on your behalf, sometimes loud and sometimes behind the scenes; parents, businesses, mayors, city councilmembers, students, attorneys, teachers, administrators, faith leaders, universities, private schools, sports fans, sports teams and lawmakers from both parties. You are loved so much,” it read. 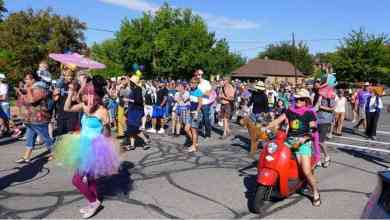