When one follows Cher on Twitter, one becomes used to — let’s even say enveloped in — her personal style of distributing information and opinions. There are frequent emojis, elipses and Caps Lock. It’s how you know Cher doesn’t farm out her tweets to an assistant and it only serves to make her more perfectly glorious. For example, this press release, to which you may choose to add your own editorial notations (or not): “Ok Universal is Doing Biopic With My Friends JUDY CRAYMER, GARY GOETZMAN PRODUCING … THEYY PRODUCED BOTH MAMMA MIA’S,& MY DEAR DEAR Friend 4 YRS, & OSCAR WINNER..ERIC ROTH IS GOING 2 WRITE IT!! FORREST GUMP, A STAR IS BORN, SUSPECT, TO NAME A FEW OF IS FILMS.” And now you know as much as we do about the planned upcoming biopic about the cultural icon’s life, produced by “Mamma Mia!” producers Judy Cramer and Gary Goetzman. Will it be a jukebox musical like “The Cher Show?” Who’ll star? Will there be serious consideration of her roller-disco phase? And can we watch it today? And if not, why not? Universal, the universe is waiting for you to get this into theaters.

“Grey’s Anatomy” star Sara Ramirez, who recently came out as nonbinary (pronouns she/they), has been cast as Not Samantha Jones on the HBO “Sex and the City” reboot, “And Just Like That…” They’ll be taking on the role of a character named Che, a nonbinary, queer stand-up comic and podcast host (on whose show Carrie appears regularly). What interactions Che will have with Charlotte and Miranda remain to be seen. But for now we’re going to be the fans we’ve always been, and offer low-key hope that the character’s presence will be an opportunity for the “SATC” franchise to finally renovate its own longstanding reputation as less-than-evolved about expressions of sexuality outside the realm of heterosexual white women and that one time one of them briefly dated a lesbian (that hope also includes nonbinary POC creatives working behind the scenes, in the manner of “Pose,” to keep it real). And while we’re making a wish list, we would also like to see Che in some fashion-forward outfits, otherwise it won’t really be “SATC” now, will it?

From executive producers Elton John and David Furnish comes a film about a man you might not know: “Hating Peter Tatchell,” a documentary centering the work of 69-year-old queer British human rights organizer Peter Tatchell. Tatchell co-founded the UK direct action group OutRage! and has committed acts of civil disobedience for decades (being beaten by neo-Nazis in Moscow and Zimbabwean President Robert Mugabe’s guards in the process). Over the course of his career he’s found himself in the center of controversy and battling rabidly anti-queer politicians and laws, but he’s kept going. Written and directed by Christopher Amos, the film will feature archival interviews, a conversation between Ian McKellen and Tatchell, as well as interviews with people like activist Angela Mason and actor Stephen Fry. It will also follow Tatchell as he stages a demonstration at the FIFA World Cup to protest the brutal treatment of LGBTQ+ people in Russia and Chechnya. And it all drops on Netflix June 20 to fire you up for Pride.

Do you miss Thom, Ted, Kyan, Jai and Carson? This is healthy and normal. Back in the 2000s on “Queer Eye for the Straight Guy” they gave some hetero allies a chance to be cooler for a moment, cook a nice meal and discard the futon, and it was all extremely sweet (though the time they made that poor bear wax his back is still a pain in our heart). Now you can see them back together again in the one-off special “Reunion Road Trip: Queer Eye for the Straight Guy,” on E! The original “Fab Five” will assemble, Avengers-style, to reminisce, reflect and, naturally, makeover one of their own. It’s Jai’s 40th birthday and apparently he needs a little zhuzhing (at least that’s the story we’re being told, does it matter?) The show is part of the E! Network’s four-part series reuniting casts of popular series like “All My Children,” “A Different World” and “Scrubs,” and in the wake of the “Real World: Homecoming” series our appetites for this sort of thing has increased. We’ll be watching and applying moisturizing masks on June 17. 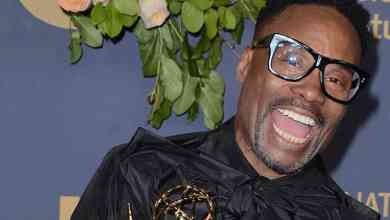