The road to winning the lottery is fraught with danger and excitement.

Last month I related the tale of traveling to Malad, Idaho to purchase lottery tickets. The story continues.

After Blaze, the stunningly handsome cashier sold me my lottery ticket and a corn dog, I flirtatiously lingered at the counter to flutter my eyelashes in my best “come hither, I’ll meet you out behind the store” look at the object of my obsession. And why wouldn’t any red-blooded American boy get all hot and bothered over a potential lottery-winning queen with a three-foot beehive and a pound-and-a-half of glitter on her upper lip?

Suddenly, I was brought out of my flirtatious trance when I was bumped in my maximus buttockus. Now normally, I don’t mind being bounced in my bodus rotundus because you never know when magic might strike. But on this occasion, to my great annoyance and horror, I was rudely knocked aside by a smelly, unkempt, dirty man with only one tooth left in his mouth, trying to purchase a bottle of extra proof tequila.

With hopes of becoming the next Mrs. Blaze dashed, I dejectedly left the store and went out into the parking lot and waited, in Queertanic while I watched the door of the store, just in case Blaze caught my hint … Because you know, hope always springs eternal! After a few short moments of daydreaming about the life Blaze and I could create together, who should come staggering out of the store towards me but the one-toothed man. He made a beeline towards me with a hungry sparkle in his eye and his one remaining tooth prominently displayed as he eagerly grinned at me. Apparently, he had also witnessed my flirtations and was interested. Thank goodness Queertanic has power locks. I clicked the switch just in the nick of time, as he reached my door and offered to share his tequila while giving me a massage. Not thinking clearly or quickly enough to come up with a decent response, I politely thanked him for the kind offer, but explained that I could not partake because I was preparing to go on a Mormon mission and alcohol was not allowed. A bit shaken by this tragic near matrimonial experience, I drove to my friend Wayne’s house to commiserate the tragedy of my lost love.

When I arrived back home, I remembered that it was underwear night at Club Try-Angles. What better way to get over such a harrowing narrow escape than by ogling nearly naked boys? So, I quickly changed into a party caftan, changed wigs to match the color of my dress, and grabbed the matching purse. As I was transferring my stuff from purse to purse, I could not find my wallet. Oh shit! I must have left my wallet in Malad at the store. I looked at my lottery ticket to see the name of the store and called and asked if they had found a lost wallet. The answer was a resounding “no.” Accepting the inevitable, I took off my party caftan and wig and proceeded to call the credit card companies to cancel all my cards. What a pain. I was most upset because my lifetime pass to the national parks card was in the wallet and that is not replaceable.

I needed to call four credit card companies and dealing with them was a lesson in frustration. With the first of four calls, after being on hold for at least 45 minutes listening to some horrible pan-flute solo, I finally got the automated response. After listening to an unbelievably lengthy menu, it asked me to answer some questions. For some reason, the computer could not understand my voice and kept repeating the question back to me. I finally asked to speak to a representative. The computer said, “I’m sorry, I did not understand your response. Did you say representative?”  Yes, representative! REPRESENTATIVE!! RE-PRE-SENT-A-TIVE!!! God damnit! Then the system kicked me out and I had to start all over again, with another 45 minutes of pan-flute.

Finally, on the fourth call attempt when stating “representative”, I got an actual person. Sadly, they had such a thick accent that I was unable to understand hardly a word they spoke to me. In desperation, I even removed my disco ball earrings hoping I could hear better. In the end, I eventually had to hang up and try yet a fifth time. After about two hours of this, victory was ultimately mine! I successfully spoke with a real person, whom I could understand, and they were very helpful and canceled my card. Now “rinse and repeat”, four more times. I was tired and hungry by the time I got finished so I went to bed, dreaming of underwear-clad boys hiding my wallet from me.

The next morning, in the cold light of day all I had left to do was to go to the DMV and get a new driver’s license, but due to pandemic concerns, hours of operation were limited and waiting times were impossibly long. Oh! My! Hell! Will this nightmare never end? Just at my greatest moment of despair, Wayne called and said he found my wallet in the creases of his sofa. I guess late is better than never!

The tales of the city 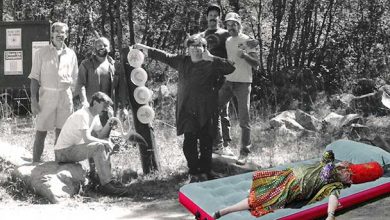 The tale of a campy queen

The tale of shrinkage