In the future when historical revisionists try to tell you that queer filmmakers made queer films, you will remember this cultural moment and remind them that no, in fact, all queer filmmakers did not, and that in further point of fact, some queer filmmakers made movies about Halle Berry battling the Moon. That’s what happens in the forthcoming Roland Emmerich sci-fi adventure movie “Moonfall,” in case you were wondering. And it’s going to be amazing, we can already tell. The plot involves the Moon deciding to simply fall out of space and crash into Earth, potentially causing a fairly large mess unless a daring astronaut played by Halle Berry can stop the Moon on its deadly mission. She will need to enlist the help of fellow astronaut Patrick Wilson and a conspiracy theorist (John Bradley from “Game of Thrones”) to really properly kick the Moon’s ass, but you know she’s going to win. In 2022 when this film arrives on the biggest, loudest, dopiest screen near you, be prepared to cheer on Captain Berry. Or maybe you’ll choose chaos and root for the Moon. We’re not here to tell you what to do.

The Whitney Houston biopic, currently in development, has switched directors. “I Wanna Dance With Somebody,” the film about the legendary singer’s life and tragic early death, the one being made with the full participation of the Houston estate, was going to be helmed by Stella Meghie (of the criminally underseen Issa Rae-starring romantic drama “The Photograph”). And now she’s out, due to the always-vague explanation of “creative differences.” Stepping in to direct is veteran filmmaker Kasi Lemmons (“Harriet,” “Eve’s Bayou”), working from a script by “Bohemian Rhapsody” scribe Anthony McCarten. So far only two cast members have been announced: British actress Naomi Ackie (“The End of the F***ing World”) as Houston and Moses Ingram (“The Queen’s Gambit”) as Robyn Crawford. The fact that Crawford will be part of this story is major for queer audiences, but we’d be lying if we said we weren’t concerned that her relationship with Whitney will be straight-washed for the comfort of non-queers. For now we’re going to trust that Lemmons will know how important that is, and we’ll be saving all our love for it.

Emily Hampshire, the deadpan no-nonsense desk clerk of “Schitt’s Creek,” recently came out as pansexual. We love that for her and the community. But will it inform her next role, the vintage bewildered housewife Mary Hartman? Only the people rebooting “Mary Hartman, Mary Hartman” for TBS know for sure. But let’s back up for a moment, and teach the children about “MH, MH,” a sexually brazen, tonally wild, and sometimes flat-out weird Norman Lear-created sitcom soap opera of the 1970s that made actress Louise Lasser a star and scandalized unsuspecting audiences across the country. So legendary was the freakout that many stations airing the soap quickly removed it from their afternoon lineups and plopped it down into very late night slots, away from the eyes of children and their furious parents. This new version will be co-written by Hampshire and gay “Letterkenny” co-creator Jacob Tierney, so there’ll be at least some sort of queer (and proudly Canadian) content for sure. But will it jolt us like it did 50 years ago? We’re ready to find out.

What’s going on with Michaela Coel in the new ‘Black Panther’ movie?

OK, gather ’round, it’s time to speculate queerly and project our collective will into the atmosphere. Here’s what we know: Emmy-nominated genius creator of “I May Destroy You,” Michaela Coel, is in the upcoming Marvel Cinematic Universe film “Black Panther: Wakanda Forever.” You can see her name on the IMDb page. Here’s what we don’t know: which character she’s playing. But… in a recent Instagram post she appears to be training with other actors from the film and her head is shaved. Do you know which Wakanda-based character has a shaved head? And, if you are one of the queer comics kids who shouted “Aneka,” then you are correct. And Aneka is one of the Dora Milaje, a woman-power warrior force in Wakanda. And Aneka is also in a queer relationship with a character named Ayo. (Ta-Nehisi Coates wrote a storyline for them in a recent series of Black Panther comics for Marvel.) And so from this we can conclude… officially nothing. But there are rumors and we want to keep spreading them and manifest this reality. So keep chanting the possibilities and let’s make it so. 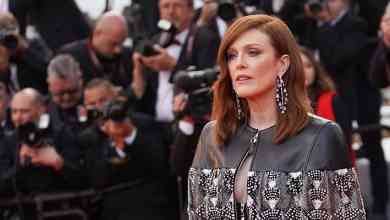 Julianne Moore is a ‘Mothertrucker’