Saying it successfully exceeded its $8 million/eight new houses goal announced earlier in the year, Encircle founder and CEO Stephenie Larsen announced a new campaign to raise an additional $13 million to help sustain the 13 Encircle houses which will be running within the next few years.

“Within a few months, we have not only raised enough to buy eight new homes, but nine,” Larsen continued. “It took people like [DOMO founder and CEO] Josh and Marina James, [Kahlert Foundation. executive vice president] Heather Kahlert, who donated a million dollars each to make this happen today.”

“It’s incredible what we can do when we bring tech, government, sports, business, and music together. We can create powerful change,” she said. “Thank you to these leaders who stand behind these kids, telling them you matter, your life matters, and you have a bright future.

“Today, we are here to announce an additional campaign to raise $13 million to sustain the 13 Encircle homes that will be running in the next few years,” she announced. “We know this is a huge ask. We also know that the mental health services that we are providing are keeping children alive and thriving.”

She said that they will not stop until they see Encircle thriving across the nation.

Cook spoke at the press conference, held onsite at the Silicon Slopes Summit at the Salt Palace Convention Center.

“Today is another milestone for an organization that has already walked a remarkable road,” Cook said. “For Provo, Salt Lake, St. George and small towns across Utah, to new homes in Nevada, Idaho, and Arizona.”

“Encircles mission is very personal to me because I see myself in the faces of these young people. I understand what it can feel like to be isolated, or like you can’t share your truth with anyone else,” he said. “It’s not easy when you’re made to feel different or less than because of who you are or who you love. It’s a feeling that so many LGBTQ people know far too well. But slowly, too slowly, we’ve seen that begin to change.”

Ryan and Ashley Smith said they were excited to help pioneer the Encircle model in Utah.

“Every state and every city in the nation needs an Encircle home, and we’re here to help,” Ryan Smith said.

“You have to take an opportunity and go into an Encircle and feel the energy that’s going on in there, and you have to see the vision,” Wade said. “I got an opportunity to do that today. I’m standing here as a representative of the Utah Jazz and as a father and a parent.”

“My daughter, at eight years old, came home and had a conversation with me,” Wade began. “Zaya was assigned to be a male at birth. She came home and told us that she wasn’t anymore. She wanted to be as she was born to be. At that moment, I had to do a lot of learning, a lot of listening, and that’s what this is about. We need to listen. We don’t have all the answers. We don’t know everything about everybody.”

“We need to understand that we live in a world where everyone is different, but we’re all trying to reach the same goal. That is to be our best selves in life,” Wade continued. “So I stand here as a proud parent of a beautiful daughter who is a member of the LGBTQ+ community. I stand here as an ally.”

“Our kids get this,” Abby Cox started. “We have had teenage kids grow up in the state in a very rural community. That’s the pinnacle of conservative communities — our rural communities. We’ve had the privilege of learning from LGBTQ youth because they were our kids’ friends, and they brought them into our homes. They were in plays together; they were in tennis together; they did all kinds of events together because they were friends. They were part of their circle of friendship. Because of that, we were able to get to know them and be inspired by them. So we’re grateful for our LGBTQ youth and what they teach us. In this world is going to be such a better place when they’re in charge.”

Spencer Cox noted that there were many powerful and important people in the room at the press conference, “but there’s nobody more important than these kids,” pointing to the Encircle youth sitting behind him.

“We know, and the date is very clear, that when an LGBTQ youth experiences complete rejection, that suicide ideation, and suicide attempts and suicide completions go up significantly,” the governor said. “If they receive just a tiny bit of acceptance — one person — the rates plunge. That one piece of acceptance changes everything. It keeps going down the more acceptance there is, but it’s that first one that is the biggest jump of all, and that’s why Encircle matters. What Encircle has done is provided that piece of acceptance, especially if there is no acceptance anywhere else. There’s a place where they can go, and they can feel loved, and where they can get therapy. Trained professionals can help them.”

“The other part of Encircle that I love is that it’s about the families. They give a place where parents, like Dwayne, who have no idea what they are doing and they’re scared and confused, and they can come in there and they are surrounded with a community,” Gov. Cox continued. “And then the community grows, and those kids feel that acceptance, and they stay. And we need them to stay. Because when they stay, they do beautiful things. They share themselves with the world, and they make places like Utah a better place.”

Encircle started with one house near the Provo Temple that opened up in February 2017. They had a youth summit in December 2017. In 2018, two more homes were built — one in Salt Lake City and one in St. George, Utah. In 2019, Encircle started its own therapy arm. In November 2020, Encircle announced a home in Heber City, Utah.

In February, Encircle announced eight more homes in Utah, Arizona, Nevada, and Idaho. They broke ground on the downtown Ogden home in March. They have also announced Las Vegas, Nev. and a possible home in Logan, Utah.

More information can be found about Encircle at encircletogether.org. 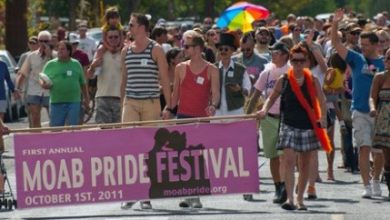