At least nine openly LGBTQ candidates sought municipal offices this year, including in city council and mayor races. Six of the candidates won election, all for city council races. Most are in Salt Lake City, but others ran in less progressive areas, like Ogden, South Salt Lake, and Springdale. Here is a rundown of how they fared, according to preliminary results available from county clerks.

Longtime gay advocate Alejandro “Ale” Puy appears to have won his Salt Lake City Council District 2 seat with 58 percent of the vote. District 2 is in Salt Lake City’s West Side, and Puy focused on bringing solutions to problems affecting one of the most marginalized parts of the city. An immigrant from Argentina, he says he is a “New American” who understands the challenges that many face and can relate to the issues affecting his district.

“The Westside of Salt Lake has historically been where those who didn’t fit in boxes live. People of color, immigrants, different religions and the LGBTQ+ people live in the west because they don’t feel judged and they feel accepted,” he said in an interview.

“As a person of color, immigrant, and queer myself, I feel at home here in this area. I am lucky I can connect with my neighbors due to the intersectionality of my identities and because we share similar hope and frustrations. This area of Salt Lake City has historically felt forgotten, many felt left behind, or unimportant. This area is very Latino, and diverse but always has been represented by white cis men who only reached out to other white voters for support,” he continued. “Because of my identities, I feel a duty to make the community better and help those that have lost hope. My connection to this district drives me to do more and I believe it is an advantage to my campaign.”

Amy Fowler received 65 percent of the vote, securing her re-election. Fowler was elected to the city council in 2017 representing the Sugar House area.

In 2013 she co-founded the LGBT and Allied Lawyers of Utah. She is currently the chair of the city council and chair of the National League of Cities — Large Cities Council.

Fowler says that being a member of the LGBTQ+ community hasn’t hindered her at all.

“While there may be people out there who don’t want to vote for me because of who I am, that is their decision and I wouldn’t change their mind anyway,” she said. “I have been taught to stand up for myself and for people around me, and I do that.

When she left Utah in 1996 to go to college, she hadn’t yet come out and thought she wouldn’t be accepted in the state.

“When I returned to Salt Lake 12 years later, it was the leaders of the LGBTQ+ community who made me realize what an amazing city we live in,” she said. “They have been fighting and working for the rights of our community since before I knew it! I am so grateful to be living in such an amazing place and am even more honored to represent District 7 and the LGBTQ+ community for the last four years. I look forward to the next four years.”

Salt Lake City Councilmember Chris Wharton won re-election for his District 3 seat against 2 opponents. Wharton was first elected in 2017 after serving two terms on the Salt Lake City Human Rights Commission. He is an attorney who has won many cases affecting Utah’s LGBTQ community — most recently winning a monumental case in the Utah Supreme Court regarding gender markers for transgender Utahns.

Wharton has served on the board of the Utah Pride Center and has donated hundreds of hours of service to the ACLU of Utah, the Rainbow Law Clinic, Equality Utah, and the Utah State Bar.

Darin Mano bested 4 challengers with 51 percent of the vote. Mano was selected to replace Erni Mendenhall when she left the city council to take on her duties as mayor. District 5 includes the Ballpark, Central Ninth, and Liberty Wells neighborhoods.

“On a nice Saturday afternoon myself and my wife and my downstairs tenant were all taking a lovely siesta when some mother fucking ignorant son-of-bitch rang our doorbell and put your piece shit unwanted solicitation in our door waking the dogs and waking us and the neighbors with an uproar,” Wuthrich wrote. “I will do everything in my power to see you never get elected to any office higher than dog catcher. I hate you. I hate your family. I hate our solicitors. I hate your contributors. I hate your sponsors. Kindly die and go to hell motherfucker!!!”

Wuthrich later apologized, saying he “regretted the ferocity and language of that email. My words were uncivil and unprofessional. From me personally, I apologize to Salt Lake City Councilman Darin Mano and his family.”

“As an Asian American and member of the LGBTQ+ community, I must stand up against hate speech and call it out when I see it. As a City Councilmember and a candidate running for election, it’s my duty to reach my constituents, listen to what is important to them and make informed decisions. There’s no room for hate in our city,” he wrote.

“I think the line that hit me the most,” Mano told The Salt Lake Tribune, “was the ‘I hate your family,’ because there’s a photo in the materials I dropped off that shows my partner and our kids. … We’re a family that’s a little outside the typical for Utah.”

Sarah Reale lost to Mano, receiving 24 percent of the vote. She ran on a platform of representing the district, rather than any of her own beliefs.

“In a representative democracy, it is the role of elected officials to represent their district. The best leader is someone who can put their own self-interest aside and lead in an equitable way. I have no interest in party politics,” Reale said. “As an empathetic leader and a good listener, I will work to represent all constituent interests. With a promise to be authentic and transparent, I will listen and learn from the people I represent – and always speak the truth.”

Reale said she was inspired to run by “local gay women in office or leadership positions.”

“When you can see people like you it gives you aspiration and hope that you can do the same. I hope to always be an advocate, a mentor, and supportive of the LGBTQ community by showing empathy, understanding, support, listening, and being transparent,” she said. “I’m a gay, Italian, educator with three younger sisters and I was in a sorority. I don’t run away when faced with challenges. And the adversity I’ve faced in my life makes me resilient and able to have hard conversations.”

Ogden City Councilmember ­Marcia White handily beat her opponent in her bid for re-election. She was first elected to the council in 2013 and is currently serving as vice-chair of the council.

Since her election, she has been investing in a vibrant and growing city, supporting public safety, and promoting excellence in government including transparency, communications, and sound financial sustainability.

Dustin Gettel earned over 70 percent of the vote for his re-election as Midvale City Councilmember. He moved from Pennsylvania to Utah with his partner in 2015 and quickly fell in love with his rapidly changing Midvale community. Dustin decided to challenge the incumbent city councilmember because of issues he saw in Midvale and won by more than 20 percentage points.

Since then, Gettel has championed progressive causes like paid parental leave for city employees, banning puppy mills throughout the city, increased walkability and bikeability, and formal recognition of LGBTQ Pride Month and Transgender Day of Remembrance.

Gettel says he is proud to be one of the few, if not only, openly gay men elected outside of Salt Lake City.

Christensen hoped to bring compassion to the table, as a gay man.

“I believe it’s safe to say, by virtue of the world we live in, that many members of the LGBTQIA+ community possess a heightened sense of empathy. We understand how important it is to listen, and we’ve experienced when others don’t understand our personal reality,” he said in an interview. “In my opinion, it’s these traits that we need more of in civic leadership — particularly here in Utah.”

He called on the city’s LGBTQ community to step up and help him get elected.

“With Salt Lake City being perhaps the only exception, LGBTQIA+ people are extremely underrepresented in Utah and the nation,” he said. “The trouble is, I feel like our community could do much better to show up to the polls. We’re not voting enough. Too many of my queer friends have never voted before. We all have a responsibility to show up if we want to see our basic liberties provided and maintained. And if you think the work already being done is sufficient—you’re wrong. We need your voice.”

In Springdale, Utah, former city councilmember Mark Chambers was in a tight race for mayor and fell 21 votes short of winning. The election drew 257 voters in the town of 514 residents, according to the 2020 Census. In the August primary, Chambers won just under 40 percent of the vote. His next competitor in the 4-way race won 36.84 percent.

Chambers ran for mayor in 2013 and lost by just eight votes.

“I was eight votes shy of winning to be mayor of Springdale,” Chambers posted back then on his Facebook page. “Thank you to all those that have supported me and Joe during this election. Though I lost, I relish the experience. Remember it is important to be involved in your community and elections, you can make a difference.”

Chambers moved from Salt Lake City to Springdale in 2012 with his husband, Joe Pitti, and opened Under the Eaves Bed and Breakfast. 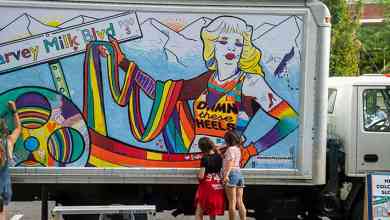