The Log Cabin Republicans, a national conservative LGBT group, gave Utah Rep. Chris Stewart their Congressional Champion Award for his work “his introduction of and continued persistence for the Fairness For All Act in the 117th Congress.”

The award was made during the group’s annual black-tie Spirit of Lincoln Gala, held at Donald Trump’s Mar-a-Lago resort in Palm Beach, Fla.

“It’s an honor to be recognized by such an important community,” said Stewart. “Everyone deserves their chance at the American Dream, regardless of their race, religion, or sexuality. That ideal can only be realized by loving our neighbors and striving for greater unity. The Fairness For All Act is a balanced, commonsense means of achieving that end. This country can accommodate civil liberties for both LGBT individuals and religious freedom. And I will not stop working until we do just that.”

After the event, Stewart described the event-goers as a “very enthusiastic” group of people. He said that the GOP has been better on LGBTQ rights in recent years.

“I think the Republican Party has been viewed as being somewhat hostile to some LGBTQ groups, and I think that’s unnecessary. There’s just been a general softening on some of these things over the last 10 years, certainly since Prop 8 in California,” he told the Deseret News.

Donald Trump attended the gala, as his wife, Melania received the Spirit of Lincoln award for her “commitment to enhancing personal freedom, encouraging individual responsibility, and ensuring equality under the law for all Americans.”

Stewart sat with the Trumps at the gala, saying he and the former president talked about golf, baseball, and “other things,” declining to offer specifics other than they had some “substantial conversations.”

Melania was the keynote speaker of the gala.

“I have always strived to ensure my work highlights and promotes our nation’s cherished principles of individual liberty and equality,” Melania said. “I am proud to support the people and organizations who implement these values of kindness in their community and around the world.”

At the event, Republican National Committee Chair Ronna McDaniel announced the ‘Pride Coalition,’ a partnership with Log Cabin ahead of midterms

McDaniel was given the “Majority Maker” award at the event, calling the organization “a partner to fight for our country’s future.”

“Conservatives in Log Cabin don’t just share our vision for a free, secure, and prosperous America — they enrich it by adding unique perspectives to our party and recruiting even more diverse candidates and supporters to join our cause,” McDaniel said.

Fairness for All Act

The Fairness for All Act sponsored by Stewart is meant to replace the Equality Act, giving religious exemptions to many of its tenets. The Equality Act has passed the U.S. House and sits in the U.S. Senate waiting for a vote.

Progressive organizations have called the Fairness For All Act an “affront to existing civil rights protections.”

“This legislation is deeply dangerous for many reasons, mainly because it would erode protections that already exist for people based on race, sex, and religion, rolling back protections that have been on the books for decades. It would expand the number of places and situations in which lawful discrimination could occur,” a joint group of 18 civil rights organizations including the Human Rights Coalition, the ACLU, and GLAAD, released in a statement.

“The Equality Act was passed through the House of Representatives with bipartisan support, and nearly 70 percent of Americans support comprehensive nondiscrimination protections for LGBTQ people. The ‘Fairness for All’ Act, on the other hand, was introduced by a small group of lawmakers. This legislation licenses discrimination while eroding the rights of people of faith,” the statement continued.

Log Cabin has announced its support of the Fairness For All Act.

“Legislative protection for LGBTQ people in the workplace, ensuring that no one can be fired on the basis of sexual orientation or gender identity.

“Protections for religious liberties, helping to find a balance between fairness, equality, and individual liberty.
“Additions to existing civil rights, anti-bullying, and housing bills to include both sexual orientation and gender identity as legally protected groups.

“This bill suggests a new direction in the Republican party that artfully balances liberty with inclusion. We fully support the Fairness for All Act.”

In February, the Church of Jesus Christ of Latter-day Saints announced support of the Fairness For All Act, saying it “harmonizes religious freedom and LGBT rights by amending the Civil Rights Act, protecting religious freedom in the workplace, protecting the rights of LGBT individuals, and preserving 1st amendment rights.” 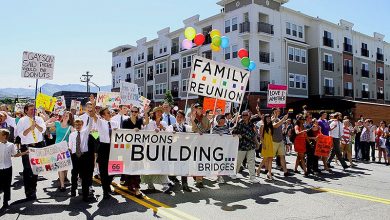