In another episode of “Elections Matter,” the U.S. House of Representatives, which has a Democratic majority, voted to protect the marriages of LGBTQ+ people should the Supreme Court overturn Obergefell, the 2015 case that saw marriage equality become the law of the land.

Never mind that this move will go nowhere in the U.S. Senate, which also has a Democratic majority, though not a big enough one to escape the clutches of the filibuster. But at least the House is trying to protect those folks who live in states that would move to invalidate or refuse to recognize their marriages should Obergefell fall. And given the Supreme Court we have, it most certainly could.

And some are eager to see it go. Sen. Ted Cruz (R-Texas) said so recently. “I think that decision was clearly wrong when it was decided,” Cruz said, according to CNN. “It was the court overreaching.”

I, for one, do not think it was wrongly decided. But then, I directly benefited from the ruling. I’ve said before that in June of 2015, I was sitting in a chair in the chemo ward, poison being pumped into a port in my chest, being treated for breast cancer. My insurance was going to run out in August, and I feared that my treatment would bankrupt my family. The day after the ruling my wife called her HR department and put me on her insurance.

So I’m biased, and surely, something like this should be decided by straight, unbiased cis men who hate me, like Cruz.

“Obergefell, like Roe v. Wade, ignored two centuries of our nation’s history,” Cruz said, according to CNN. “Marriage was always an issue that was left to the states.”

This is untrue, and one need only to look at the Supreme Court’s 1967’s Loving v. Virginia ruling, which established that individual states could not bar interracial marriage.

Besides, he said, if a minority group wants civil rights, they just have to convince the majority group that is actively and intentionally oppressing them that they actually are humans deserving of rights. Easy peasy.

“The way the Constitution set up for you to advance that position is to convince your fellow citizens, and if you succeeded in convincing your fellow citizens, then your state would change the laws to reflect those views,” Cruz said. “In Obergefell, the court said, ‘No, we know better than you guys do, and now every state must, must sanction and permit gay marriage.’”

Look, having to beg people to recognize your humanity SUCKS. Putting the civil rights of minorities to a vote is heinous. I remember living in Royal Oak, Michigan in the early 2000s when the city was trying to pass an LGBTQ-inclusive human rights ordinance. I canvassed door to door in support of the ordinance and heard people basically say repeatedly that I did not or should not exist. The ordinance didn’t pass, by the way.

Do you really think that interracial marriage would be legal if it was left up to the white majority in 1967? Hell, would it even pass NOW if put up to a popular vote? The majority of white men AND white women voted for Trump, an avowed racist, and increasingly violent white supremacist groups are grabbing power at all levels of government.

We are seeing the horrors of letting the states decide whether or not women get to have access to reproductive health care now that Roe v Wade has been struck down. A 10-year-old girl pregnant from rape having to cross state lines to get an abortion. A woman in Wisconsin experiencing miscarriage bleeding for 10 days because the hospital turned her away. Another woman in Texas having to carry a dead fetus for two weeks before she could get the care she needed.

These aren’t isolated incidents. This is the America the Christian fascists want. And if that America does not include recognizing the humanity of women and pregnant people, you can bet your ass that there’s no room for LGBTQ+ equality.

D’Anne Witkowski is a writer living with her wife and son. She has been writing about LGBTQ+ politics for nearly two decades. Follow her on Twitter @MamaDWitkowski. 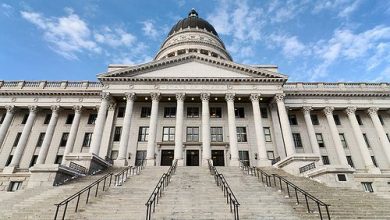