Custom bakers in California and Colorado are still fighting in court over whether a business can refuse to “commit art” based on the artist’s personal beliefs. In California, Tasties Bakery was sued by a lesbian couple for refusing to create a cake for their wedding. The state Department of Fair Housing and Employment ruled the bakery discriminated against the couple in violation of California’s Unruh Civil Rights Act. The baker claimed she cannot be forced to create “art” for an idea with which she disagrees. The Kern County Superior Court ruled that Miller acted lawfully, upholding protection for her beliefs in Bible teachings, though not specifying which of the contradictory biblical passages passed muster. Colorado cake artist, Jack Phillips, got a U. S. Supreme Court victory after refusing on religious grounds to make a gay couple’s wedding cake a decade ago. He is now being sued for refusing to make a cake celebrating a “gender transition.” Not much about transgender people, other than angels, in the Bible, but he is still “agin it.”

The Florida law which restricts classroom instruction about sexual orientation and gender identity, called “don’t say gay” law by opponents, was allowed to go into effect by two different federal judges. Both U.S. district judges ruled those who brought the suit did not have legal standing to challenge the law. The judges encouraged plaintiffs to file an amended suit. The former director of Equality Utah and one-time Utah state senator, Scott McCoy, who is now interim deputy legal director at the Southern Poverty Law Center, is part of the suit. He opined, “The callous disregard towards increased bullying based on gender identity and the removal of anti-bullying guidance shows exactly why we must keep fighting.”

Activist Peter Tatchell, of the eponymous Peter Tatchell Foundation, went to Doha to protest the mistreatment of gay men, lesbians, transgender people, and other allied sexual minorities in Qatar. The Persian Gulf country will host the 2022 FIFA World Cup. Tatchell protested at the National Museum of Qatar claiming, “Qatar arrests, jails, and subjects LGBTs to ‘conversion’.” For good measure, he wore a tee shirt emblazoned with the hashtag, “#QatarAntiGay.” The foundation’s YouTube page shows that Tatchell was standing in a pedestrian area when a security officer approached him and who folded up the sign. The video ends when the guard walks away. Tatchell claimed he was seized and detained for 49 minutes. After he was “freed” he went to the airport and flew out. The Qatar authorities said he had not been arrested but was asked to leave. Former Qatari national team player Khalid Salman and World Cup Ambassador told a German reporter that being gay is “haram,” or forbidden in Islam, and that he has a problem with children seeing gay people. Other British “Futbol” fans have expressed concern that alcohol consumption is restricted in Qatar. This will significantly affect an important aspect of the fan experience. “Getting pissed and fighting makes the game watchable,” said one fan.

Camp Tamarack in Oregon is an annual three-day outdoor experience for 5th and 6th graders. This year’s camp was interrupted by complaints by one school district’s objections to non-binary and transgender camp counselors. The district superintendent brought the district’s students home early. The district said it would, “err on the side of caution” and withdraw students home shortly after their arrival because “some students expressed discomfort with the arrangements.” Camp officials said they would have liked to give objecting parents the option of separate housing not supervised by objectionable counselors, but Oregon’s nondiscrimination policy, according to the camp, says, “an individual’s gender identity is protected under state and federal guidelines and is not information we share with others.”

Ryan Murphy produces digital entertainment like “Nip/Tuck,” “Glee,” and “American Horror Story,” which include gay, lesbian, and transgender themes. He produced “Dahmer — Monster: The Jeffrey Dahmer Story,” for Netflix. Originally it was given an “LGBTQ” search tag by the streaming service. The tag was protested by LGBTQIA pressure groups claiming the story was not appropriate for the tag. Netflix removed the tag over Murphy’s protest. He told the New York Times he wanted the tag because racism and homophobia prevented authorities from bringing the killer to justice for so long. “It was the biggest thing I’ve ever seen that really sort of examines how easy it is to get away with things with the white privilege aspects,” he explained. Murphy says he discussed the removal with the company to be told, “People were upset because it was an upsetting story.” Murphy’s response was, “Well, yeah. But it was a story of a gay man and, more importantly, his gay victims.”

Gays and lesbians in Japan see a move by Tokyo’s city government to begin issuing “partnership certificates to same-sex couples” as a step toward marriage equality. The certificates allow the couple’s unions to be recognized for services such as housing and health care but do not confer any rights when it comes to inheritance, adoption, or spousal visas. Japan is the only country in the Group of 7 association of economically “developed” countries that does not have marriage equality. Polling indicates that a majority of Japanese citizens support marriage equality, but politicians are hesitant. Courts are mixed. In Osaka, the nation’s ban on same-sex marriage was upheld while a court in Sapporo ruled the ban unconstitutional. Tokyo, with a population of 37 million citizens has had almost 200 certificate applications so far.

Trying something new, Saturday Night Live producers decided to hire someone who is funny. Unfortunately for some, that someone is controversial comedian Dave Chappelle. He has been the center of controversy for jokes he made about gays, lesbians, and transgender people in two Netflix programs. In one riff, Chappelle defended J.K. Rowling for her comments on transgender females being in “women’s safe spaces.” Chappell’s comments describing himself as a TERF led to criticism and to Netflix employees staging a walkout. The Twitter mob has called on SNL staff to boycott the show and flooded social media with pics of other SNL hosts wearing t-shirts with transgender-supportive slogans. SNL has had stars and guest hosts in cross-dressing sketches, most famously John Belushi as Elizabeth Taylor choking on chicken and Dan Ackroyd as cooking show host Julia Child. These portrayals were in the early years of the program before comedy became so serious.

“No!” to gender-affirming therapy

Florida’s state medical boards approved language restricting “gender-affirming care” for transgender minors. Children currently in medical care were “grand-parented” and can continue with the therapy. The rule regulates the prescription of puberty blockers or hormone therapy to new patients who are minors, and it forbids gender-affirming surgeries. The Florida Board of Medicine said during the hearing that the rule proposes “ethical, compassionate psychotherapy that respects the child’s experience.” Equality Florida said this rule will be the only restriction of gender-affirming medical therapies for minors instituted by a state medical board in the United States. Some legislatures in other states including Utah are considering legislation for restrictions. Florida doesn’t have a state-wide policy on “gay conversion therapy.” Palm Beach and Broward counties have local regulations, which are currently under court review. 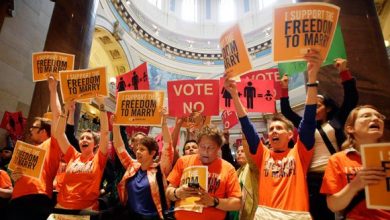