For the 19th year, you, our readers, have spoken. We received nearly 3,500 votes in our annual readers’ choice poll, and we are naming 125 FABBY Award winners in this issue. Some are many-time winners, and some many-time winners were out-voted this year. A rainbow wave, if you will.

Most Fabulous Inexpensive Restaurant
THE OTHER PLACE
A unique comfort-food restaurant that is family-oriented from bone-to-bone. Greek and American favorites in a warm, friendly space. See the Salt Lake Men’s Choir noshing Thursday nights, and don’t forget to grab your QSaltLake Magazine on the way out the door!
Runners up: The Med, Oh Mai!

Most Fabulous After-Hours Restaurant
DEE’S
Dee’s has been a favorite after-bar hangout since Michael Aaron wasn’t even old enough to get into bars. So … that’s like 100 years! Always open, locally owned. Friendly (mostly) and very inclusive staff. Let’s go to Dee’s! That’s what daddy says. And the FABBY voters agree.
Runners up: Nacho Daddy, Belgian Waffle and Omelet Inn

Most Fabulous Pizza
PIE PIZZZERIA
From a graffiti-strewn dungeon a stone’s throw from the UofU to six locations from Ogden to South Jordan, the home of the Zappi is just pure, gooey yum. Hand-tossed dough, in-house sauces and dressings, the same way they’ve done it for 42 years.
Runners up: Settabello, Nomad East

Most Fabulous Local Coffeehouse
COFFEE GARDEN
Don’t forget to bring your laptop and backpack to this one-stop bean counter that’s been dazzling for decades. From across the street in its plant-and-lattice days to its swank, minimalist digs today. Sit inside or out, and don’t forget the scones, croissants, and quiche. And pick up a Q!
Runners up: Sugar House, Publik

Most Fabulous Contemporary Restaurant
THE DODO
The Dodo was, without doubt, the largest, strangest dove ever to have lived. Once a local favorite on 9th East, the Dodo now occupies a prime location on 21st South and 14th East, overlooking the tall pines and cottonwood trees, flower gardens, and wide green lawns of Sugar House Park, plus a stunning sunset view of Mount Olympus. Oh! And the food, especially the desserts, is good too!
Runners up: Eva, Stanza

Most Fabulous Vegetarian/Vegan Restaurant
ZEST
Healthy plant-based, organic vegan, vegetarian and gluten-free options and creative, delicious cocktails. Casey says, “dining with us will delight the eyes, tantalize the nose and dazzle the taste buds, from the first bite to the last. Fresh fruits and vegetables burst with vibrant colors. aromatics permeate the air while layers of complex flavors meld to perfection on the tongue.” Wow!
Runners up: Vertical Diner, Sweet Hazel & Co

Most Fabulous Sandwiches
MOOCHIE’S MEATBALLS AND MORE
From the back of a pottery studio to four locations from downtown to Lehi, Moochies is about meatballs and a damned fine Philly Cheesesteak. Oh, and the gourmet grilled cheese sandwich with a side of mac and cheese. Holy hell. Don’t bypass the international salads. Guy Fieri says the meatball sub will ‘’knock your head off.’’ But don’t worry. No heads are truly harmed at Moochies.

Most Fabulous Asian Restaurant
SHANGHAI CAFE
This once all-vegetarian Chinese food restaurant is now carnivore-friendly and has added Thai food as well. Best beef and broccoli in the state, and among the best pho you will find in the city.
Runners up: Takashi , Kyoto

Most Fabulous Greek/Mediterranean Restaurant
LAZIZ
Remember the days when Laziz was only at the Farmers Market? Then they got all fancy and opened a restaurant off Harvey Milk Boulevard. And NOW they have a THIRD one opening on 2nd South, complete with a bar behind it. Mediterranean wraps, bowls, and platters, along with burgers and baba ghannouj.
Runners up: Other Place, The Med

Most Fabulous Italian Restaurant
STANZA ITALIAN BISTRO
The re-envisionment of Faustina on Third South now boasts an ultra-modern interior and contemporary menu rooted in Italian classics. From Wagyu sourced in Utah to small plates to a pecan-crusted rack of lamb, this is dining on the highest level with a fantastic wine selection.
Runners up: Caffé Molise, Sicilia Mia

Most Fabulous Wine Selection
BTG
When BTG opened, Michael Aaron thought he had died and gone to Heaven. Our favorite thing to do is to go for the flights with tastes of three to five wines. How else can you enjoy a $50 bottle of wine if not an ounce or so at a time? Also serving food, this is a great date night, or a “where should we go now?” night. Downstairs from Caffe Molise.

Most Fabulous Steakhouse
RUBY RIVER
Peanut shells and movie stars at this local “rustic” favorite. Ye haw! Start with the 1-pound onion explosion — a work of art. Reasonably priced steaks in a world where steak is not reasonably priced. Gorgonzola New York Steak. Do I need to say more?

Most Fabulous Beer Selection
THE BAYOU
Buzzy eatery and bar offering Cajun-inspired fare and pub grub plus over 7 million beers you could spend a week deciding among. Seriously, we counted them. Just pick one and get out of our way.
Runners up: Slackwater, TF Brewing

Most Fabulous Barbecue
PAT’S BBQ
Another Guy Fieri favorite. Who says great barbecue is reserved for the South? At Pat’s BBQ in Salt Lake City, Pitmaster Pat Barber is what Guy calls a “culinary gangster” because of his unbeatable briskets, chickens and sausages that he smokes for 10 hours at a time.
Runners Up: Sugar House, Charlotte-Rose’s Carolina BBQ

Most Fabulous Soups
SOUP KITCHEN
So, another category which we need to just go ahead and name for the winner. Most locations are in the worst places anyone would put a restaurant, but they still have a line out the door. Over 30 years of serving bread sticks. Oh, and soup and sandwiches.
Runners Up: Dodo, Little Saigon

Most Fabulous Ogden Restaurant
NO FRILLS DINER ON 25th
A cute, kitschy place that used to be on 12th St. in Ogden is now a bustling 25th Street diner. We’ve gone a dozen times since it opened last December in its new digs. Perfectly located to nosh during Ogden Pride, the Farmers Market, or just a jaunt up to Ogden on Frontrunner.
Runners Up: UTOG Brewing, Roosters

Most Fabulous Restaurant for Breakfast
PARK CAFE
I’ve been going to Park Cafe since the day it opened. In 1982. Even then there was a line out the door on the weekends. It might be the French Toast Foolishness, but I really thing it’s that I giggle to think that the gays at the Park Cafe would even know what “The Single,” “The Double Play,”
Runners up: The Other Place, Left Fork, Pig and a Jelly Jar

Most Fabulous Restaurant for BRUNCH
EGGS IN THE CITY
I was worried when Eggs in the City moved to Millcreek. But, frankly, because it’s right off the freeway, I can get there faster than when it was on 13th South. I always go for the Eggs Benedict, though the Mexican Skillet sometimes grabs me. But to me, it’s the people there who draw me.
Runners up: Market Street, Green Pig

Most Fabulous Bakery/Pastries
GOURMANDISE
It all started in downtown Salt Lake 30 years ago on 300 East. A bakery with a new name we couldn’t pronounce, but pastries and cakes we couldn’t resist. Now also in Draper, American Fork and the SLC Airport.
Runners Up: Fillings & Emulsions, Tulie

Most Fabulous Mexican Restaurant
RED IGUANA
You can’t leave Salt Lake without eating at Red Iguana, or you haven’t experienced Salt Lake. Red Iguana is so popular, they had to open a Red Iguana 2 just two blocks away to keep the lines from reaching the airport. Owners Bill and Lucy are some of the nicest people you will ever meet. Holy mole!
Runners up: El Chihuahua, Taqueria 27

Most Fabulous Seafood
CURRENT FISH & OYSTER
I may be the only gay person in Salt Lake who hasn’t been to Current. I know! What is wrong with me?? I mean, the architecture alone should draw me. And I love seafood! I have a 2023 resolution: Eat at Current.
Runner up: Market Street

Most Fabulous Brew Pub
SQUATTERS
Whether your squatting at the airport, or downtown SLC, or in the Park City area, the Squatters Mug Club is a must. The best beers in town served with the best food in the surroundings of a beautiful historic building. We go for brunch and the $3 mimosas and bloody marys. But that’s just how we are.
Runners Up: Red Rock, Proper

Most Fabulous Salads
JIM’S FAMILY RESTAURANT
Somehow this Denny’s-Dee’s-wannabe restaurant has snagged three FABBY Awards over the years for their salads. Frankly, I’ve look at the menu and, yeah, they make salads. Someone message me about why it wins this award.

Most Fabulous Burger Joint
LUCKY 13
If there is an award out there for best burger in Utah, Lucky 13 has won it multiple times. This is their 10th Fabby. Of course our favorite is the nut butter burger. Although one day we hope to wrap our lips around the Big Benny. If you can finish him off in an hour, they’ll give you $200. Is that prostitution?
Runners up: Proper Burger, Apollo

Most Fabulous Park City Restaurant
HIGH WEST
The Saloon at High West is known for pairing whiskey with heavy victuals (pronounced “vittles”) As you would ask which glass of wine should be paired
with your meal, ask your server which whiskey will pair well with your food selection.
Runners up: Red Banjo Pizza, Flannigan’s

Most Fabulous New Restaurant
SWEET HAZEL & CO.
All-day “Brekkie,” and “Brunchie” weekends, or “Lunchie.” This one-time vegan candy store has expanded into a vegan bistro as well, serving avocado toast to herbivorous pastrami Ruben, to salads and kombucha. Head to Midvale for their candy bars!
Runners up: Eggsburgh, Encircle Cafe 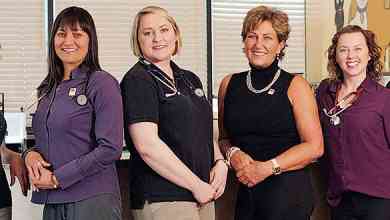