Note: The Club Q shooting suspect identifies as non-binary and uses they/them pronouns. However, their father uses “he/him” pronouns when referring to his child and that is reflected in the quotes.

There are a lot of bad parents out there. But I nominate Aaron Brink as the Worst Parent of 2022.

Brink is the father of the person who shot and killed five people and injured 20 more at Club Q in Colorado Springs. When interviewed by San Diego’s CBS 8 in the aftermath of the shooting, he said his top concern was not for the people killed and injured, but for his child. Specifically, he expressed relief that his child is “not gay.”

Brink tells a CBS 8 reporter that for a long time he thought his child was dead because his ex-wife had told him that their child committed suicide and that he learned recently that wasn’t true.

He then says he doesn’t know what his child has been accused of, all he knows is that it is “crazy stuff” related to a gay bar. “I don’t know what the heck he was doing in a gay bar,” Brink says. His voice is difficult to understand as he doesn’t enunciate, perhaps part of the “permanent damage” he says he has from former meth use and head trauma.

“Well, he’s accused of going on a mass shooting at a gay bar and killing five people,” the reporter informs him.

Let that sink in. Not only is it a horrible thing to say, but it isn’t even necessarily true. I do not know the shooter’s sexual orientation, but it’s alarming to me that this father jumps to the conclusion that his child can’t be gay because his child went on a shooting spree at a gay bar rather than doing something truly horrific, like dancing or talking to a cute guy.

“I’m a Mormon. I’m a conservative Republican, and we don’t do gay,” Brinks explains.

Brink says he wanted his child to follow in his footsteps.

“I wanted him to be a professional fighter like me,” he says. “I praised him for violent behavior really early. I told him it works. It is instant and you’ll get immediate results.”

Everyone at Club Q that horrible night got to witness the “immediate results” of his child’s violence. Especially since a gun is much more effective than fists when killing is the goal.

When asked when his child might have first gotten interested in guns, Brink surmises, “As soon as he had hair on his ass.”

“I showed him how to use these guns right here,” he says, putting up his fists. “I taught my son how to become a destructive weapon with his hands if he needs to.”

And yet, they didn’t use their fists as weapons. They used a fully automated long gun (multiple reporters have indicated it was an “AR-15 style” weapon). Because why risk using your fists when it’s so easy to get a gun in this country?

In this interview, Brink truly does grapple with the awful reality of what his child is accused of doing.

There does not seem to be another suspect. It’s pretty clear who did this.

Let me be clear: Addiction does not make you a bad parent. Cage fighting doesn’t make you a bad parent. Teaching your child that violence is the answer to their problems and wanting them to fight? That’s the issue. Brink seems to have been out of his child’s life for quite some time, but lessons learned before age 10, which is when Brink says he lost contact with his child, tend to stick with you.

“Life is so fragile and it’s valuable,” Brink says. For a man who has just essentially said that being gay is worse than killing gay people, he apparently has no sense of irony. 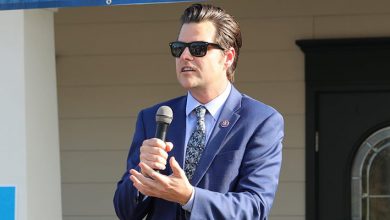